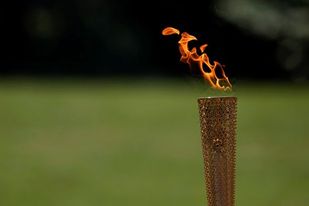 The Olympic motto 'Citius Altius Fortius' represents the perfect springboard for creating an original and exciting poem. In class today, we analysed the words of the motto and used them as the beginning word for three stanzas charting the journey of the Olympic flame from 'birth' through to 'adulthood'. We looked at photos taken from Google Images of different stages of the flame's journey and read this recent article from The Guardian for background information. We worked together to identify some of the images and Olympic associations in this examplar poem, which follows the suggested structure:

Swifter than a spark I was born,
A spark struck from a golden disc.
I shot down in a sudden stream from the highest heavens
And burst into life,
Kicking and screaming in my silver cradle.

Higher than the spotless sky
My mother gazed down at me
With a shimmering smile, flaming with pride
As they held me aloft,
Armoured in bronze.

Stronger than Hercules,
Heavy with heroism,
I surged through streets,
Scaled mountains,
Raced over raging rivers
And grew…

Until I arrived at the city gates,
Triumphant,
My destiny blazing.
Citius Altius Fortius.

Then the children began working on their own poems. Here is what a couple of them came up with...

These are the support materials if you would like to use this idea yourself: